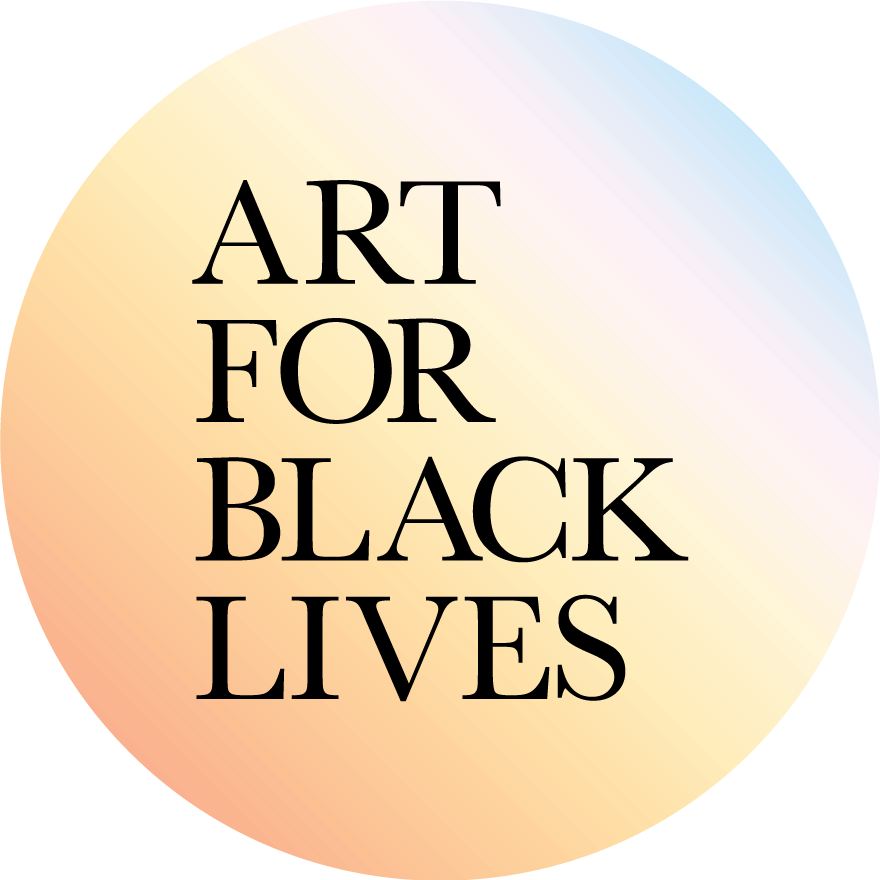 All profits from R4 will benefit The Frances Thompson Education Foundation — an organization providing tuition assistance to Black Trans and non-binary students — as well as the inaugural Art For Black Lives artist residency.

Math Bass (b. 1981, New York, NY) is an LA-based interdisciplinary artist whose work abstracts recognizable forms into brightly colored shapes and hyper-stylized imagery, forging an ambiguity that allows different interpretations of the same image. In their popular series Newz!, Bass creates a visual lexicon of forms and symbols that is skeptical of objective meaning. They describe their interests broadly as a tension — between movement and containment, between language and meaning. Recent solo exhibitions include Tanya Leighton, Berlin; Hammer Museum, Los Angeles; The Jewish Museum, New York; Yuz Museum, Shanghai and MoMA PS1, New York. Their work is included in the permanent collections of LACMA; the Hammer Museum, LA; MoCA, Los Angeles; MoCA, San Diego and Yuz Museum, Shanghai, CN.

James Benning (b. 1942, Milwaukee) is a California-based filmmaker and artist who has created an expansive body of work over the past 50 years, encompassing avant-garde film, painting, photography and installations. Rising to prominence in the late 1970s for his work in film, Benning developed a distinct visual language associated with long, real-time, single-shot frames and the use of landscape to convey deeper themes, which he continues to deploy to this day. Exploring topics of politics, marginalization of peoples, ecology and technology, Benning often returns to the grand narratives of the US and their hidden undersides, inviting close examination of the lesser-observed and inviting reflection on the broader cultural consciousness. Benning has long been interested in folk art (he said that when he first started making films, in the early 1970s, he was “like a folk artist”) and has been making facsimiles of folk artists he admires since 2005. Part of Benning’s ongoing and wide-ranging Alabama Project, his print for Art for Black Lives is an image of a painting by Charlie Lucas, which Benning purchased when he met Lucas in Salem, Alabama a few years ago. James Benning has exhibited widely, including in solo exhibitions at neugerriemschneider, Berlin; O-TOWNHOUSE, Los Angeles; Museum of Natural History, Vienna; VOX Centre de l’image contemporaine, Montreal; and Kunsthaus Graz, Austria (2014), among others.

Charlie Lucas (b. 1951, Pratville, Alabama) is a Selma-based artist and operator of the Tin Man Studio, a studio space and gallery where he also teaches free children’s art classes. Lucas’s work is concerned with communication and his own personal experience relying largely on visual and aural modes of communication. Working primarily as a sculptor, Lucas is a descendent of six generations of craftspeople: his mother and grandmother were skilled quilters and ceramicists and his grandfather (who taught him to weld) and great-grandfather were blacksmiths. Lucas’s work has been exhibited in numerous group exhibitions across the United States, including at the National Museum of American Art, Smithsonian Institution, Washington D.C.; New Orleans Museum of Art; Birmingham Museum of Art; Museum of Craft and Folk Art, San Francisco; University of Mississippi Museum of Art and the University of Georgia Museum of Art, among others.

Nicole Eisenman (b. 1965, Verdun, France) is a Brooklyn-based artist whose depictions of social environments shift between abstraction and figuration. Their keen eye for our contemporary condition and attention to its details—its hoodies, cigarettes or flower bouquets—home in on the frictions and complexities of being alive in the world today. Purple Loose Strife is a print from a watercolor of the flower which grows in the Fire Island Pines, adjacent to the Long Island Sound. Loose Strife has a long history of medicinal use, especially for stopping bleeding, removing PCBs from contaminated water and soil or for treating Athlete’s Foot.  Having established themself as a painter, Nicole has expanded their practice into the third dimension. They are a MacArthur Foundation fellow and were inducted into the American Academy of Arts and Letters in 2018. Their work was included in the 2019 Venice Biennale and in three Whitney Biennials. Selected solo exhibitions include the Astrup Fearnley Museet in Oslo, Norway; Contemporary Austin; Staatliche Kunsthalle in Baden-Baden; Susanne Vielmetter, Los Angeles; Secession, Vienna, the New Museum, New York; Anton Kern Gallery, New York; Barbara Weiss Galerie, Berlin and Hauser and Wirth, Somerset. Nicole Eisenman is a member of A4BL partner Queer|Art’s mentorship program. 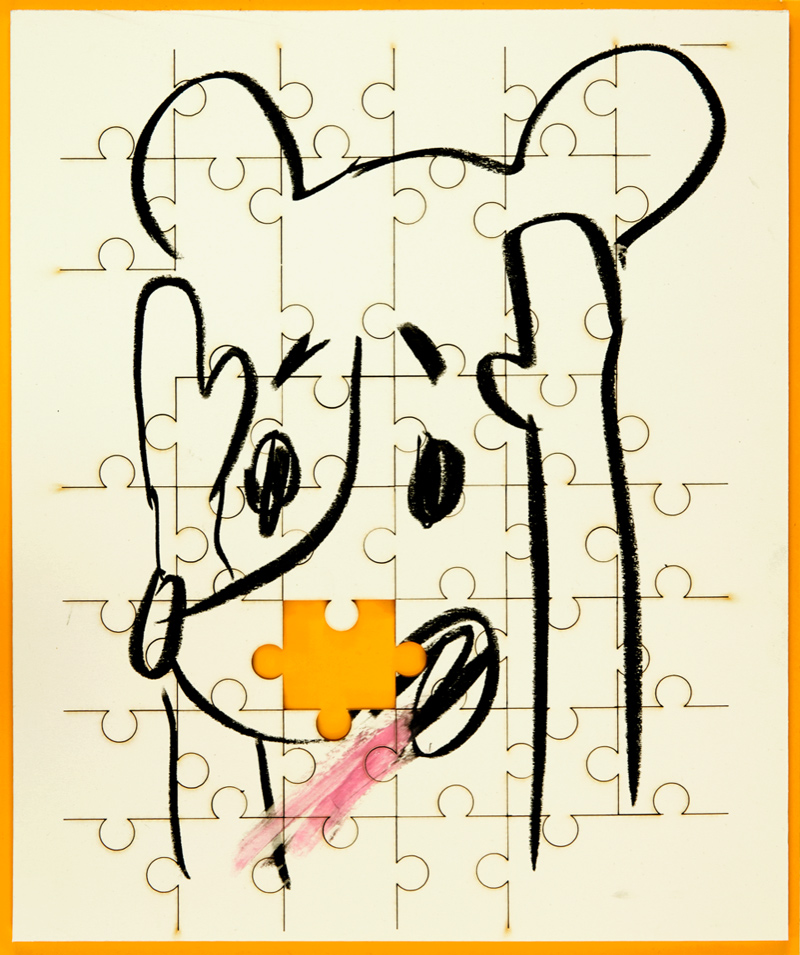 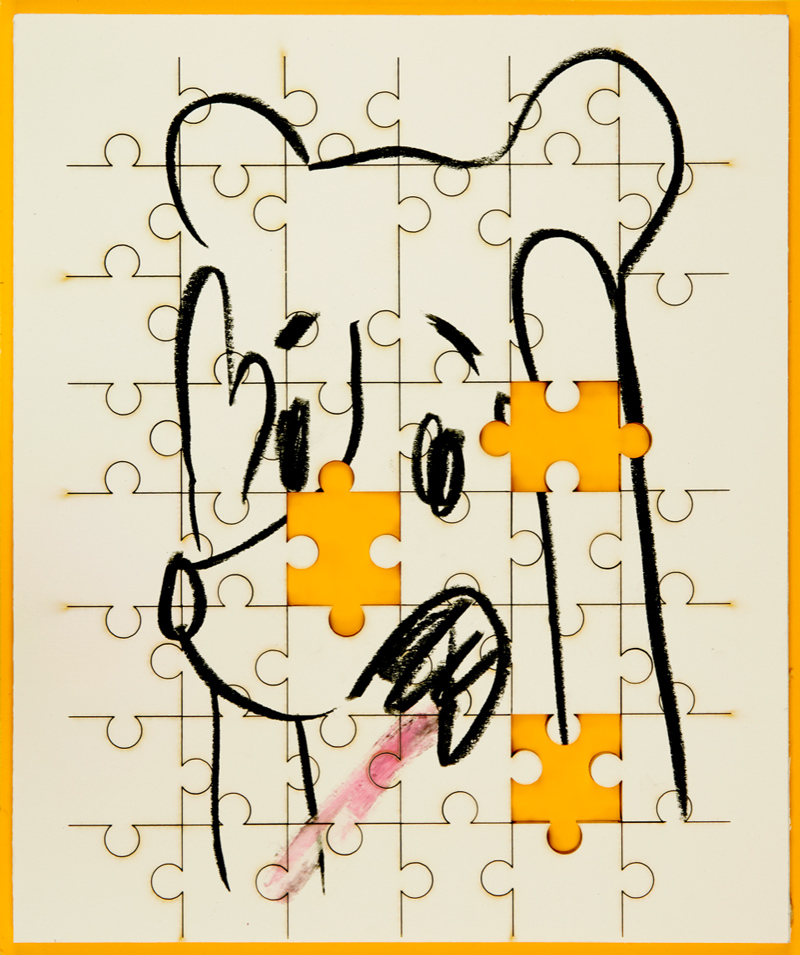 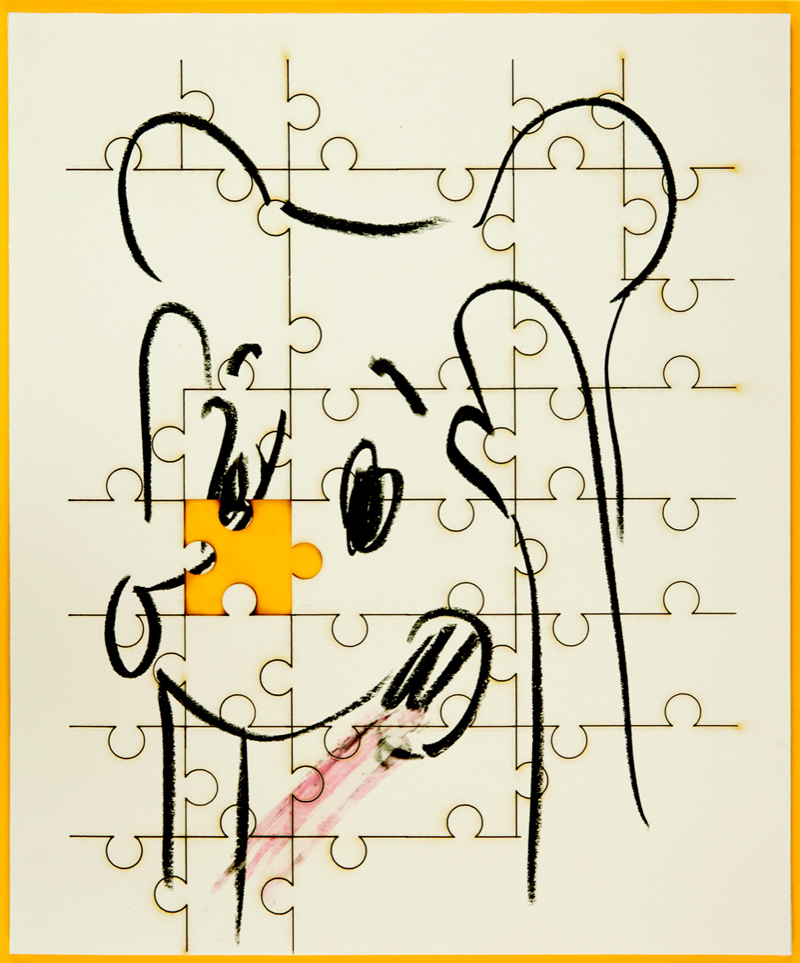 Simon Fujiwara’s Untitled (Who Puzzle) are three unique puzzle works in lasercut foam core on board from a series titled “Who the Baer,” currently on view at the Fondazione Prada, about a cartoon bear named Who, who is fighting for an identity beyond the accumulation of images of self.

Simon Fujiwara (b. 1982, London) is a British-Japanese Berlin-based artist whose work offers a unique view into the mechanics of identity construction and the ‘industry of the individual’ in contemporary life. His works emerge from a personal grappling with the contradictions of inherited racial, national, historical, cultural values. In his most ambitious projects that range from a full reconstruction of the Anne Frank House (Hope House, 2016-8) to the “re-branding campaign” for his former high school art teacher after a nude media scandal (Joanne, 2016), Fujiwara deftly navigates culturally potent topics with enigmatic and surprising approaches that broaden conversations and avoid didacticism. Through his multiple formal strategies, Fujiwara is able to use the tools of our hyper-mediated world – from advertising, museum making to theme park design – to hold a distorted mirror to our contemporary, liberal societies possessed with spectacle, fantasy and authenticity. A graduate of Cambridge and Städelschule, Fujiwara has had recent solo exhibitions at Kunstinstituut Melly, Fondazione Prada, the Blaffer Art Museum and Esther Schipper, Berlin. His work was also included in the Venice Biennale (2009), São Paulo Biennial (2010), Gwangju Biennial (2012), Shanghai Biennial (2012), and Sharjah Biennial (2013).

Jasmine Gregory (b. 1987, Washington DC) is a Zürich-based artist whose paintings work satirically with absurd notions of identity, subjectivity, and consumption through abstraction and figuration. She is interested in exploring hyperbolic motifs within traditional parameters, pushing deeply into illusionistic and distorted space. Gregory’s style and technique moves between academicism and amateurism, seriousness and playfulness. This oscillation creates unconventional relationships within composition that not only challenge and critique the traditional discourse of painting, but also disrupt conventional, cis-white visual symbolic orders in hyper-theatrical ways. HBIC or Head Bitch In Charge depicts an imagined character with long green acrylic nails laying out the Facts. Gregory toys satirically with the idea of representation in figurative painting as a performative act as a parallel to performative activism, namely circulating facts via social media for activist purposes. Her works have been exhibited at Les Urbaines (CH), Kunsthalle Zürich (CH), Karma International (CH,), and Park View/ Paul Soto (BXL/LA) among others. She also participated in “Reimagining the Museum: Open Letters and a Decolonial Framework” a roundtable discussion hosted by the Hammer Museum (US).

Jutta Koether (b. 1958, Cologne) is a painter, performance artist, musician, critic and theoretician who lives and works between New York and Berlin. Incorporating elements of punk and underground culture, Koether’s painting and performance stage an attack on pure abstraction, often using cheap materials like chains or studs and rehashing compositions from a male-dominated art historical canon by the likes of Nicolas Poussin and Francis Bacon. The heart motif in this print is derived from a performance titled xxapollo at Artists Space, New York in January 2020. In her performances, Jutta Koether enacts a highly specific form of entangled action centering on and around specific artworks. Embedded with performative possibility, these objects – positioned in a room, a situation, a city – circuit together in a network of language, duration, and the artist’s active negotiation between producer and produced. Jutta Koether has exhibited widely, including solo exhibitions at Museum Brandhorst, Munich; Serralves Foundation, Porto; Levy Gorvy, New York; Buchholz Galerie, Berlin and Bortolami, New York, among others.

Doron Langberg (b. 1985, Israel) is a New York-based figurative painter known for intimate portraits of friends, lovers, family. Langberg’s works are queer in a manner that extends beyond sexuality, concerned with questions of interiority, relationships and the body. Physicality appears both in the work and its making, as various methods of mark-making communicate different forms of emotional information. His textures are dynamic and sensual, as we follow his figures from beach to bar to bed. Langberg’s contribution to Art for Black Lives, Nisan, is a portrait of his brother, painted during a recent trip home after many months’ absence. Langberg received an MFA from Yale University School of Art and is the recipient of the American Academy of Arts and Letters John Koch award for painting and the Elizabeth Greenshields Foundation Grant. Langberg’s work has been the subject of solo exhibitions at Yossi Milo Gallery, New York, the Schwules Museum, Berlin, Carl Freedman Gallery, Kent and (upcoming) at Victoria Miro. His work has been included in group exhibitions at the LSU Museum, American Academy of Arts and Letters, Leslie-Lohman Museum, New York; The PAFA Museum and (upcoming) at the ICA Boston.  He is an alum of A4BL partner Queer|Art’s mentorship program.

Bony Ramirez (b. 1996, Tenares, Salcedo, Dominican Republic) is a New Jersey-based artist whose work draws inspiration from Caribbean iconography and Renaissance style. In bold portraits of contorted, often nude figures, drawn on paper and then adhered to painted wooden backdrops that evoke the Caribbean tropics, Ramirez’s work meditates on the legacy of colonialism in his native Dominican Republic. He cites Renaissance tropes like romanticized gore as influence: references recontextualized by afro-caribbean elements (a plantain tree, a durag) and reclaimed by the Black and Brown figures who inhabit them. Layers of material evoke the vestiges of Euro-colonialism that continue to inhabit the Caribbean psyche — a “double consciousness” that is occasionally, violently, interrupted. Ramirez’s work has been featured in solo exhibitions at Bradley Ertaskiran, Montréal and Thierry Goldberg Gallery, New York, as well as recent group exhibitions at Jeffrey Deitch, Los Angeles; Company Gallery, New York; Nino Mier Gallery, Los Angeles; Regular Normal, New York; Zürcher Gallery, New York and Anna Zorina Gallery, New York.

Young-jun Tak (b. 1989, Seoul, Korea) is a Berlin-based artist who considers the socio-cultural and psychological mechanisms that form belief systems. Working across sculpture and collage, the tension between his native South Korea’s queer and religous communities is a driving force in his practice.  Die bunte Gefahr (The Colorful Peril) (2020) is a collage of found images related to centuries-long racism against East Asians, as well as the complex race relations between East Asian and Black communities. The work sprung from reflections on solidarity, as well as the history of subordination and violence both against and between Black and East Asian communities. His work was exhibited in the 11th Berlin Biennale and the 15th Istanbul Biennial as well as at the Hall Art Foundation in Derneburg. He is nominated for the Berlin Masters Prize 2021.

Round 3 raised $50,000 for The Frances Thompson Education Foundation. Any prints from Rounds 1-3 purchased after Round 4 June launch will benefit R4 causes.